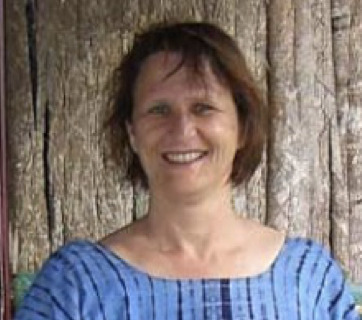 In January 2008, Uschi Drolc abandoned us after a long and severe illness. Her years at the University of Munich, studying general linguistics, phonetics and social anthropology, laid the foundation of her passion for African languages and for Africa itself, a passion which lasted until the end of her short life. She graduated in African linguistics at Bayreuth University in 1991. Her Master’s thesis “The perfect in Swahili. Theoretical foundations and corpus analysis”, under the supervision of Franz Rottland, earned not only the award of the city of Bayreuth for outstanding theses but was also the basis of her first academic publications. During the years that followed, she committed herself to her doctoral studies on “Swahili as an interlanguage”. Supported by a scholarship, she was able to publish parts of her research findings on the Maa language and the influence of Swahili as interlanguage on Maa-speakers. In presenting the latest results of her research, she participated actively in academic conferences. To earn her living after the expiration of her scholarship, she was a graduate assistant, and later a research fellow, at the Chair of African Linguistics II (Franz Rottland) at Bayreuth University. Her PhD thesis “Swahili among the Maasai. On the Interlanguage Swahili of Maa Speakers” was published in 1999, followed by the study “A Linguistic Bibliography of Uganda” in the same year – co-authored by Uschi Drolc, Caroline Franke and Franz Rottland. The so-far under-researched Cangin languages, which are a group of Atlantic languages – a subgroup of the Niger-Congo language family – acted as her next field of research, from 1998. This new challenge was closely connected with extended field research in Senegal. She started her new research with the support of a Postdoctoral grant from Bayreuth University. However, Bayreuth was unable to off er her promising academic perspectives, so she continued her research under the auspices of Bernd Heine at the University of Cologne. The German Research Foundation (DFG) funded her project on “Cangin Languages: Divergence and Convergence”. New insights in morphophonological processes of Atlantic languages and a diachronical analysis of the effects of contacts with other languages were results of her research. Gerrit Dimmendaal, also of the University of Cologne, boosted her interest in the field of a historic-cum-comparative study of Cangin languages. With the results of her fascinating study, she earned her postdoctoral lecture qualification in African linguistics in 2005.

The short remainder of her life was academically dedicated to a study on verb valency in the Laala language – again at the University of Cologne – which she completed with her usual thoroughness combined with intensive field studies. Colleagues and friends organised an international workshop in September 2007 for her, but her ill health was already such as to prevent her participation in person.

Her personality was full of zest for life, and her intellectual curiosity, directed at far-off places, was legendary. Also legendary was her courage; her prevailing mood was characterised by never losing hope, even in the darkest hours of her life. In spite of her hard fate and the pitfalls of academia from which she suffered, she left behind her the impression that she lived her life in a self-determined and happy way. Together with her two children and husband, we are mourning the passing of Uschi Drolc.