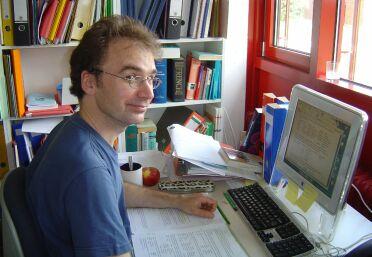 Shortly before completing several months of fieldwork in Mali, Stefan Elders succombed to a short but severe illness, due to a tropical intestinal infection. He had set out with a donkey cart as usual for a remote Dogon village, where he wanted to spend one more week collecting data on the local language, which he had been studying under extremely difficult conditions since September 2006. Notwithstanding all the material hardships, he was driven by the same passion and intellectual curiosity that had characterized his previous fieldwork in Africa, and only a week before he had written an enthusiastic e-mail commenting on some unusual features of this language. His work was part of an American research programme, led by Jeffrey Heath, that has the aim of making a systematic record of the Dogon languages, about which too little is known. Stefan Elders was particularly well qualified to undertake this task.

For his degree in comparative linguistics and African languages (Afrikaanse Taalkunde) in Leiden he chose an extremely broad range of topics. The list of African languages he studied during and after this time is very long. It covers all the language phyla in Africa, with the exception of Khoisan, in the form of articles and monographs, whether long or short. He was a meticulous and self-critical scholar, spending much time revising otherwise finished manuscripts before he was satisfied. The most outstanding example is his Leiden Ph.D. thesis on an Adamawa language spoken in Cameroun, which was published in 2000 under the title ‚Grammaire mundang‘ and which is today considered as one of the best studies in this language family.

At the beginning of 2000, Stefan Elders joined the working group ‚Study of the Gur Languages (West Africa)‘ attached to the Chair of African Languages (Afrikanistik I) at Bayreuth University, and devoted himself to Kulango, a language spoken in the Ivory Coast about which very little was known. He was able to continue this work up to the end of 2005 within another project, also financed by the German Research Council (DFG). In between he was invited to spend some time at La Trobe University in Melbourne (Australia), which enjoys a high reputation among general linguists. Before his death, Stefan Elders was able to write up the results of his research work in Bayreuth in the form of a substantial monograph on Kulango and to submit it to the printers. It is expected to be published this year under the title ‚Grammaire kulango (parler de Bouna, Côte d‘Ivoire)‘.

In Stefan Elders, African Linguistics has lost one of the younger generation‘s most distinguished and enthusi¬astic scholars. He was so fascinated by the world of African languages that he devoted his whole energy to it, and it became his great passion. We will miss him for his fine, quiet sense of humour, his integrity, and his scholarly work, which reflects his rich linguistic knowledge and his great experience of African languages.