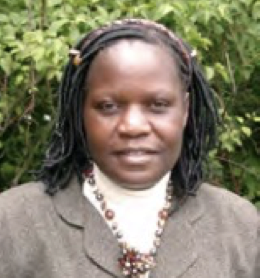 On the 28 September 2013, Naomi Luchera Shitemi, prominent professor of Kiswahili at Moi University Eldoret, Kenya and BIGSAS Partner University coordinator in Eldoret, passed away at the age of 54 years after bravely fighting cancer for almost two years. She was an outstanding scholar of Swahili Studies recognised both nationally and internationally. Her death creates a big hole in the academic community in Kenya and Bayreuth where she was a regular guest and colleague. Her contribution to the “living partnership” between Bayreuth and Eldoret has been immense: she participated actively in the first BIGSAS application phase and was in the BIGSAS delegation that went to Berlin for the prolongation meeting; she contributed to other projects born out of the partnership between Bayreuth and Eldoret, among them, the SEED project on New ICT strategies and the Bayreuth alumni network; and she has been part of the mentoring group for many BIGSAS JFs. The University of Bayreuth and BIGSAS, cognisant of her multiple engagement here in Bayreuth, dispatched a delegation to bid her farewell at her funeral. The delegation headed by BIGSAS Vice Dean, Rüdiger Seesemann, was composed of BIGSAS JFs and Alumni Lena Kroeker, Magdaline Wafula and Sam Ndogo. In recognition of her brief but successful career, a three-day funeral ceremony was organised for her, with church services at the All Saints Cathedral in Nairobi and at the St. Mathews Cathedral in Eldoret. More than 500 people attended her burial at her rural homestead where she was finally laid.

She will continue to be remembered for promoting Swahili scholarship in Kenya and beyond in her capacity as a founding member of the National Swahili Association (Chama cha Kiswahili cha Taifa, CHAKITA). She also served as the first chairperson of the East African Swahili Association (Chama cha Kiswahili cha Afrika Mashariki, CHAKAMA) representing Swahili scholarship in the East African Union. She had a particular interest in translation and intercultural communication and her involvement went far beyond the academic realm. Promoting Swahili as a national language in Kenya, she played an essential role in translating the Draft Constitution of Kenya into Swahili in 2002. Later she translated the Truth, Justice and Reconciliation Report into Swahili. She also served as translator in the Pan- African Parliament, in the Ministry of Higher Education in Kenya, working closely with UNESCO and the African Union’s Academy of African Languages (ACALAN).

Besides her academic achievements, Naomi Shitemi also held administrative positions. She served as Deputy Vice Chancellor for Research and Extension at Moi University and was a DAAD consultant and a member of the DAAD Alumni in Africa. She will be missed by many.