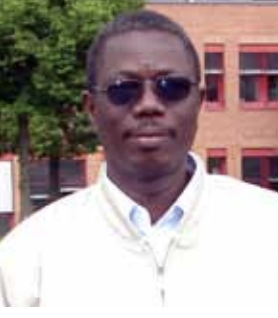 Pierre Malgoubri is head of the Department of Linguistics at the University of Ouagadougou. He stayed as a DAAD research fellow at the Chair Afrikanistik I (Gabriele Sommer), from May to July 2010. His principal research domain is dialectology. He set out by describing and classifying Mooré (the main language in Burkina Faso) dialects; later he turned to Bisa (Mande) dialects and at present he is investigating Nuni (Gur) dialects. Pierre Malgoubri is no newcomer to Bayreuth. In 2006 and 2007 he was working in Bayreuth together with Manfred von Roncador within the project A1 „Effects of globalization processes on the vitality of languages in West African cities“ of the Humanities Collaborative Research Centre SFB SFB/FK 560. During his stay in Bayreuth he prepared a publication on Nuni dialects, from which he presented a paper within the African linguistics research colloquium.