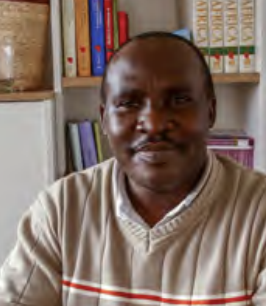 Gastor Mapunda, Head of the Department of Foreign Languages and Linguistics at the University of Dar-es-Salaam, Tanzania, was a post-doctoral fellow of the German Academic Exchange Service (DAAD) for the second time in the Winter Semester 2014-2015. Here at the University of Bayreuth, he was guest of the Department of African Linguistics I and also an associated senior fellow of the Bayreuth International Graduate School of African Studies (BIGSAS). His research interests include contact linguistics and address forms in Ngoni, a Southern Tanzanian language.

Gastor Mapunda, who holds a PhD in Linguistics from the University of Dares- Salaam, has taught language-related courses at various levels and institutions of higher learning in Tanzania. His current research focuses, among other things, on classroom interaction in Kiswahili, language attitudes, code-switching and related issues. He has collaborated with colleagues in African linguistics at Gothenburg, Sweden. In the near future, he will complete a Ngoni-Swahili- English Dictionary on which he has been working for some time now.