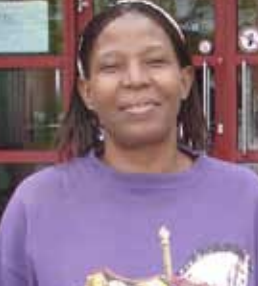 Balaibaou Clémentine Kassan, head of the department of linguistics of the University of Kara, Togo, stayed as a DAAD research fellow at the Chair of African Linguistics I in September/October 2010. Her research focuses mainly on the Kabiyè language belonging to the Eastern Gurunsi branch of the Gur languages, but also on Bago, Lamba, and Dilo, belonging to the same branch. During her stay, she was able to make use of the extensive documentation of the Gur archive at the Chair of African Linguistics I, as well as of the Africa section of the library of the University of Bayreuth, for a comparative study of noun classes in Kabiyè, Tem und Dilo. Her studies during her stay fit into the Gur research which is still a focal issue at the Chair of African Linguistics I, with research done by Gudrun Miehe, Kerstin Winkelmann and Manfred von Roncador.