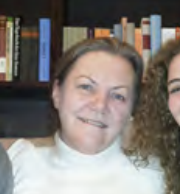 After many years of teaching Swahili as a lecturer in the University of Bayreuth’s Language Centre, Gerlind Scheckenbach bid farewell to colleagues and friends in September 2013 as she took her retirement. She contributed significantly to the steadily growing prominence of Swahili as an integral part of various BA and MA programmes in linguistics, literature, anthropology, history, geography, etc. at the University of Bayreuth. Having lived in Tanzania for several years with her family, Gerlind Scheckenbach joined the Language Centre in the 1990s and has been actively involved in supervising Swahili tutors over many years. She supported the Swahili Choir and took care of guests and students from Eastern Africa as well as students who spent a semester abroad in a Swahilispeaking country.

Gerlind Scheckenbach is succeeded by Frederick Bosire and Rosanna Tramutoli who started teaching as a team in October 2013. Frederick Bosire was born and grew up in Nakuru District, Kenya. He holds a BA in Swahili Studies and an MA Literature in Cultural Contexts both from the University of Bayreuth. He is currently working on his PhD on Swahili literature and development in the International Doctoral Programme (IPP) “Cultural Encounters”. Rosanna Tramutoli received her MA in Comparative Studies in Naples, Italy. She also studied African Linguistics at Leiden (Netherlands) and spent a year in Dar-es-Salaam (Tanzania). She is currently working on a PhD on Swahili body terminology in African Linguistics.