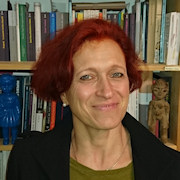 Klaudia Dombrowsky-Hahn teaches the West African language Bambara at the Language Centre of University of Bayreuth. She also teaches Phonology and Morpho-Syntax of African Languages; and Methods of Linguistic Field Research.

She studied African Linguistics; Romance Linguistics and Literature; and Pedagogical Theory at the University of Cologne. In 1987, she obtained a two-year DAAD-scholarship to study Bambara and Peul at INALCO in Paris. She participated in research projects directed by professor Gérard Dumestre on the sociolinguistic situation and functional literacy in southern Mali. In 1997, she got her PhD at the University of Bayreuth, where she held a scholarship in the frame of a graduate ‘training programme’ in ‘Intercultural Relations in Africa’ financed by the German Research Foundation (DFG). Her thesis deals with contact phenomena between the Mande language Bambara and the Senufo language Minyanka spoken in southern Mali for which she was rewarded with the University Award of the city of Bayreuth.

In July 2006, she got a scholarship at the Max-Planck-Institut of Evolutionary Anthropology in Leipzig. She has taught Bambara at the University of Bayreuth, Mainz and Frankfurt; and has participated in diverse research projects: including, among others, the project “The Effects of Globalisation on Languages in West African cities” - in the frame of the Humanities Collaborative Research Centre “Local Action in the context of global Influences” (SFB/FK 560); and in the DFG project “The language of the Karaboro” - directed by Professor Gudrun Miehe.

Klaudia Dombrowsky-Hahn is married and has two adult children.