Awards for our staff and students 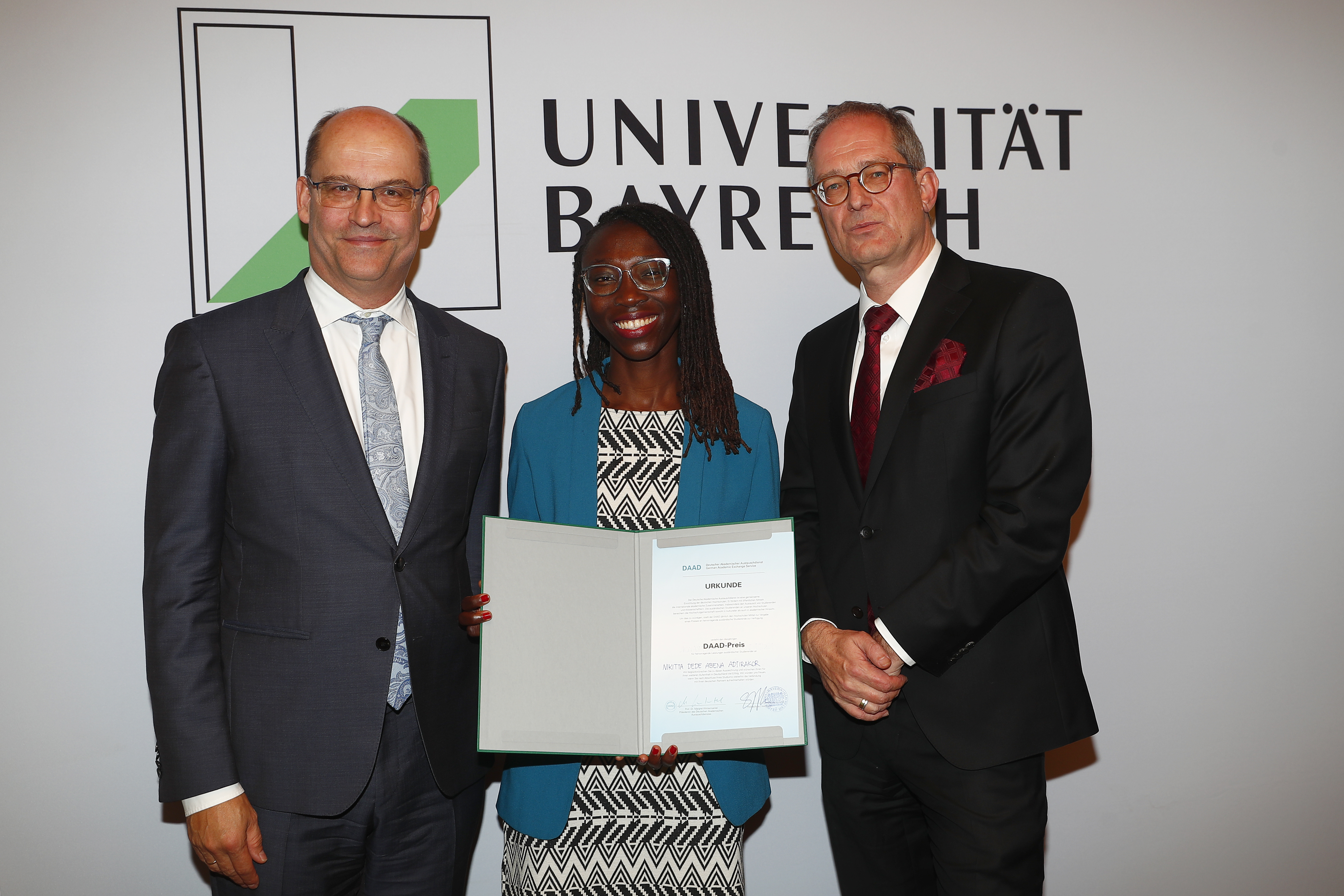 Nikitta Dede Adjirakor was born in 1992 in Accra, Ghana. She is currently writing her PhD within the framework of the Bayreuth International Graduate School of African Studies (BIGSAS) on the aesthetic experiences of spoken word and hip-hop in Dar es Salaam. In November 2019, she received the DAAD Prize for Outstanding Achievements of a Foreign Student studying at the University of Bayreuth.

The award was in recognition of her research achievements and social commitment. She has been actively involved in creating awareness about the prevalence of women’s sexual and reproductive health issues for which she has produced a film titled “A Thousand Needles” (www.athousandneedlesfilm.com) which has screened at numerous film festivals in Germany, Ghana and USA. She has also published poetry, fictional and non-fictional narratives that address women’s experiences with reproductive health. In addition, she founded the organization Write Ghana Literary Initiatives which promotes, and documents literature produced in indigenous Ghanaian languages. Its initiatives have included the Ghanaian Languages Literature Festival and the Ghanaian Languages Short Story Prize. 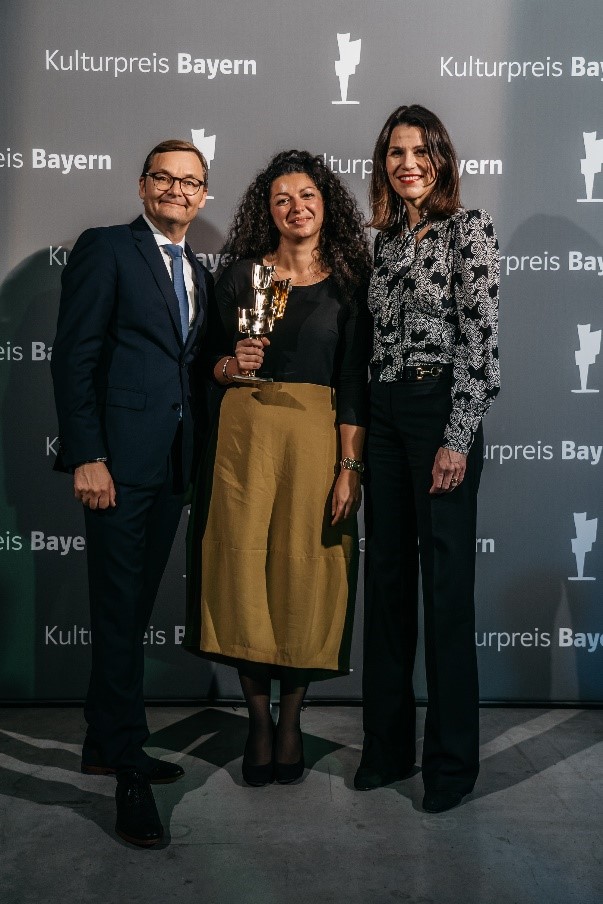 Annachiara Raia, born in 1988 in Naples, has been a Research Associate in in African Languages since April 2017. She obtained a BA in “Languages and Cultures of Asia and Africa”, and an MA in “Languages, History Cultures of Mediterranean and Islamic Countries” at the University of Naples, L'Orientale.

, for her thesis, which she pursued in a framework of the University of Naples and Bayreuth University, she worked on the Swahili version of the story of Joseph. She defended it in January 2017. She has furthered her academic training through field research in Kenya; a Summer School on ‘World Literature’ in Lisbon; and seminars on ‘World Philologies’ held in Naples.

On 8 November 2018, Annachiara Raia was with the Culture Award Bavaria as the best graduate of the University of Bayreuth for her dissertation "Utendi Yusuf - A critical Text edition of the Joseph story and study on its adaptation to the East African Swahili Coast ". 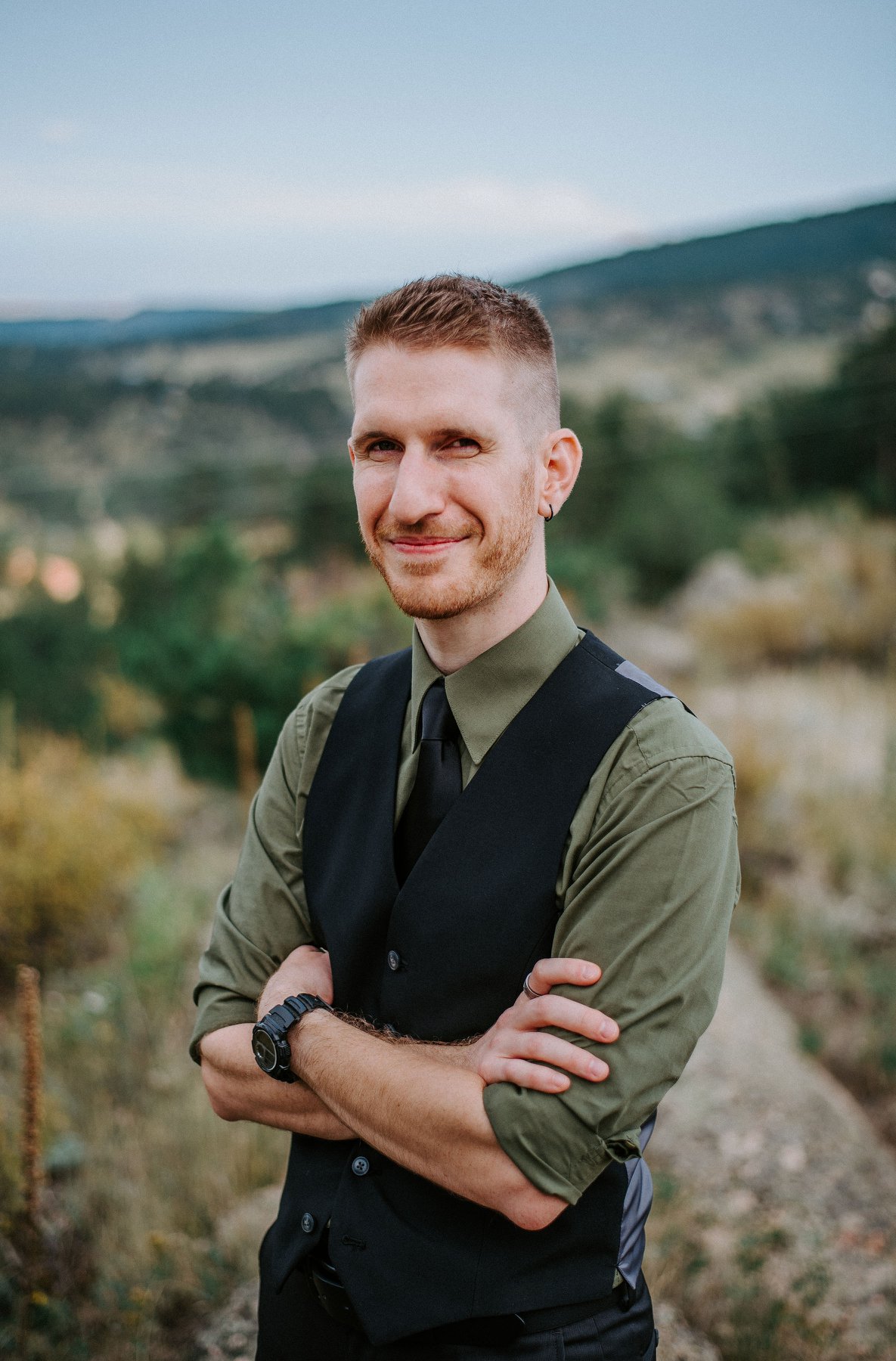 Brady Blackburn was born in Shawnee, Kansas, USA. He is currently doing his Master of Arts in African Verbal and Visual Arts at the University of Bayreuth. On 9 November 2018, Brady won the DAAD Prize (German Academic Exchange Service), which is awarded annually to foreign students who study in Bayreuth with outstanding achievements and make a significant contribution to dialogue.

He has been doing work in Ghana, partnering with a rural village to build a language arts center that includes a library of appropriate literature, an outdoor performance area, and a classroom for literacy classes and writing workshops in both English and Akan-Twi. This has been through the NGO that Brady and his wife started together, called Untold International.

The DAAD Prize was a great honor, and it has allowed Brady and his wife to buy plane tickets back to Ghana to be part of the inauguration and grand opening of the language arts center, which is set to happen in March 2019. “The community is very excited to have this center open”, says Brady. It has been under construction for two years and It is the only library for miles around. It will likely attract eager learners from the surrounding villages as well. 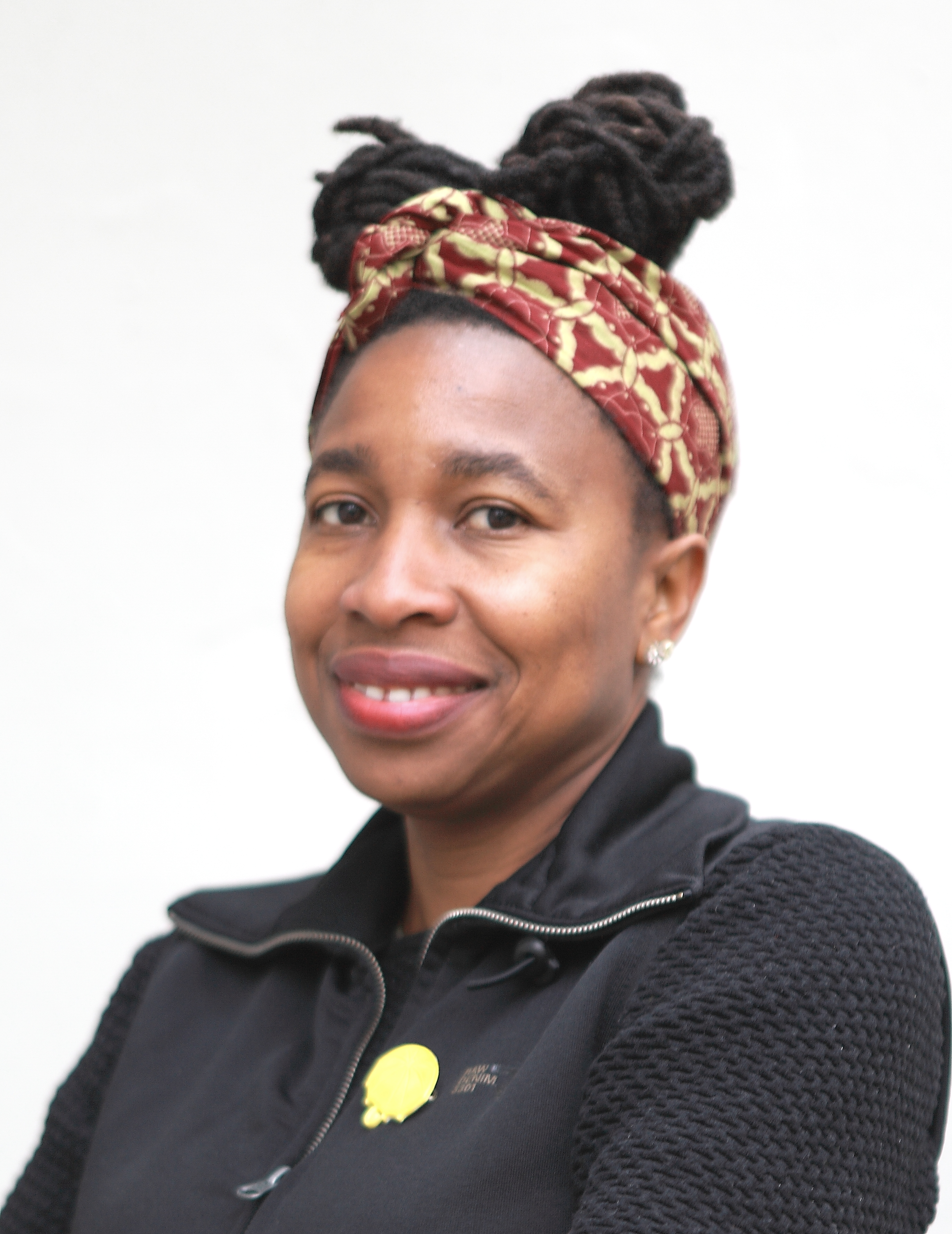 Georgina Maxim, born 1980 in Harare, Zimbabwe is an artist and Curator. Georgina is a Co-founder and Co-Director of Village Unhu, an open art studio collective created in 2012 by Misheck Masamvu, Gareth Nyandoro and herself that provides studio spaces, residency programs, workshops and exhibitions to artists.

She studies towards her Master in African Verbal and Visual Arts – Languages, Curation and Arts at the University of Bayreuth.

Georgina Maxim’s work combines weaving, stitch work and the utilization of found textiles creating objects that evade definition. The dresses are deconstructed, and at times reconstructed to find new ways of giving tribute to and reflection upon the person that owned the original garment. Maxim describes it as ‘the memory of’.

See more of Georgina and her art on Youtube:

In February 2018, Georgina was shortlisted for the Henrike Grohs Art Award, a biennial prize dedicated to artists who are living and working in Africa and practicing in the field of visual arts.

“Being nominated for the Henrike Grohs Award came much of a surprise to me”, says Georgina. It meant recognition and it meant existence amongst fellow artists that had a story to share without fear or favour. But mostly it meant upholding the legacy of the late Henrike Grohs. She shares the nomination of the award with the artists of Village Unhu who have been patient and believed in the struggle to grow together and to be willing to feed from each other in the confines of Village Unhu as a collective. 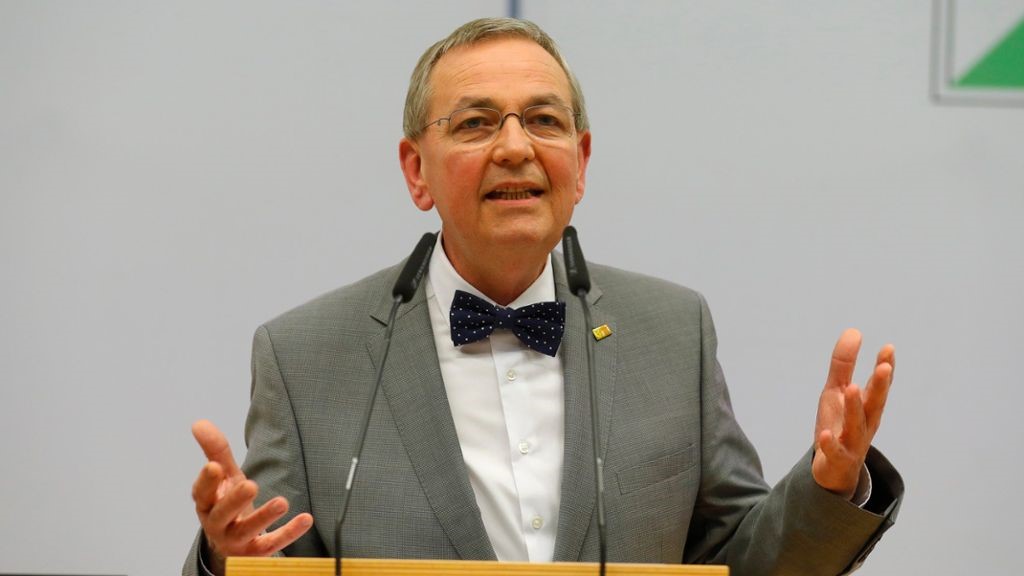 In June 2013, Clarissa Vierke received the Heinz-Meier-Leibnitz Award for her outstanding research on Swahili Poetry.  She has been selected as one of nine young researchers for the award a committee from the German Research Foundation (DFG) and the Ministry of Education and Research (BMBF). The prize has been annually awarded since 1978 and is regarded as one of the most prestigious acknowledgement of young researchers in Germany. It is nominated after the physician and former DFG president Professor Heinz Meier-Leibnitz. 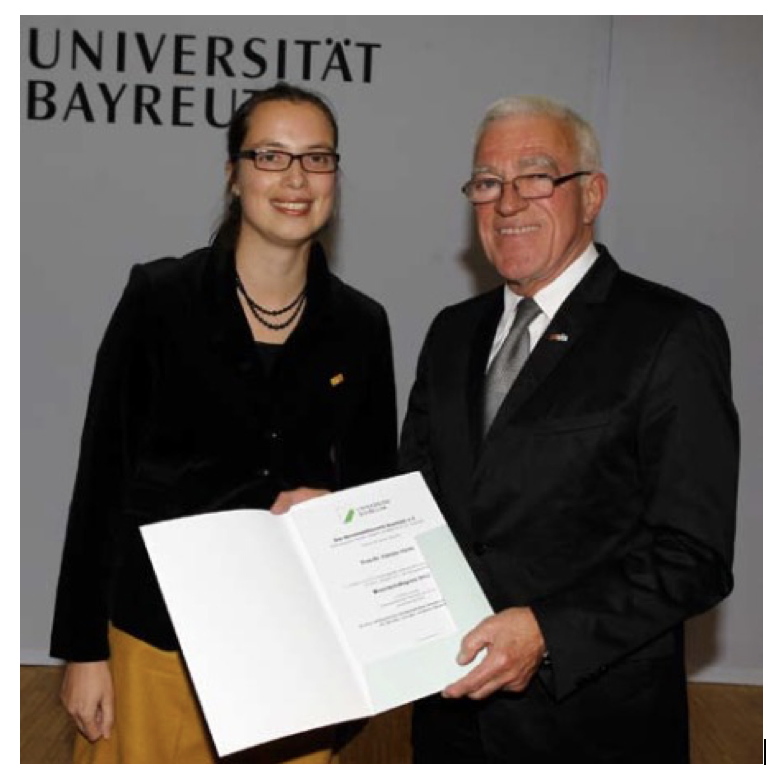 Clarissa Vierke received the research award (Wissenschaftspreis) from the University Association of Bayreuth (Universitätsverein). It is awarded annually to one outstanding post-doctoral researcher. On the occasion of this year’s Dies Academicus, the chairman of the University Association, Horst Eggers, presented the award to Clarissa Vierke and highlighted Vierke’s merits in ground-breaking and innovative research on languages and cultures of Eastern Africa.

Vierke has been working on the cutting edge between linguistics and literary studies always taking into account the important view of African actors. She received her PhD as Junior Fellow of the Bayreuth International Graduate School of African Studies (BIGSAS) with an excellent dissertation on classical Swahili poetry from Kenya. Since then, she has been extending her research focus on contemporary literary genres from East Africa and is currently working on an international interdisciplinary research project on language contacts in lusophone Africa (Mozambique).

The University of Bayreuth has nominated her in 2012 for the renowned Heinz Maier - Leibnitz prize of the German Research Association (DFG),